Okay so maybe this is more of a what I eat after I climb rocks, but maybe you eat these things too after climbing rocks?!?

We recently did another indoor rock climbing situation. To be honest, I don’t think it’s for me…we did auto belay and once I climbed up I had a hard time letting go of the wall so I could be dropped down. That being said I’m still quite eager to go sky diving some day 😀

After all that we decided to grab some food and found Surf n’ Turf Tacos where they specialize in all things taco. 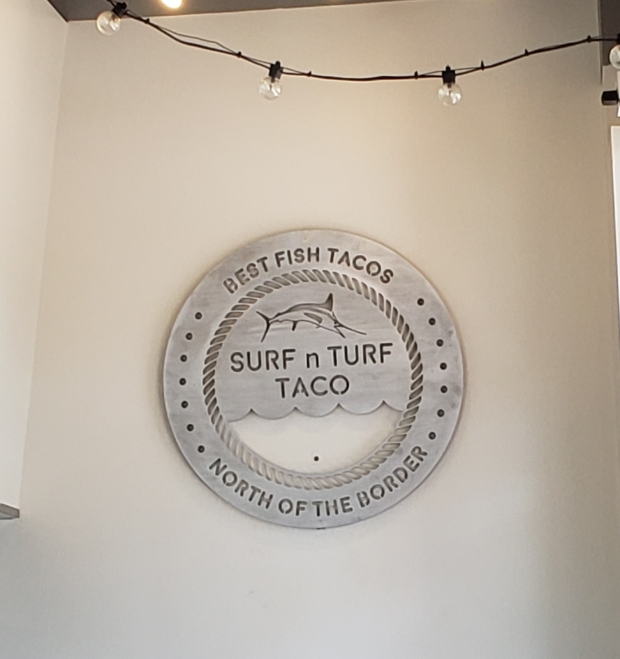 Chips and self serve salsa for the win! The chips were warm which made me very happy 🙂

Chicken and chicken were our tacos of choice which came with chicken, cilantro, onion, and chili sauce. The tacos were fresh and super savory. They had this cheese layer on the bottom of the tortilla which held everything together.

We did opt for a seafood burrito to share. We ended up getting the mahi mahi burrito which came with rice, beans, cheese, onions, cilantro, and baja sauce.

I wasn’t sure how I would feel about having fish and cheese together, but the burrito ended up being really delicious. The beans, rice and cheese combined to make a creamy texture which was broken up by the chunks of mahi mahi.

It was very filling, but we always have room for dessert 😀

There was a Rita’s close by and some mango Italian ice with a dollop of soft serve sounded like a great way to end the afternoon. It was perfection!

I am a little curious now, what do you guys eat after you go rock climbing?

2 thoughts on “What you eat after you climb rocks”